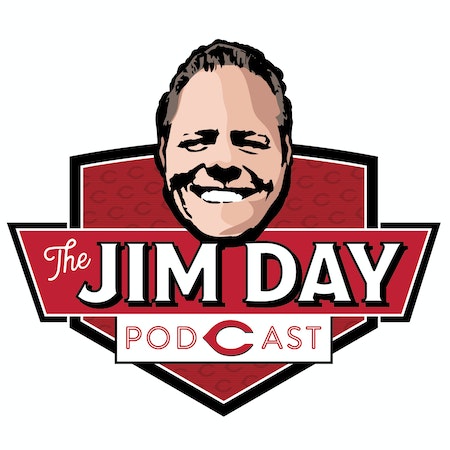 Take deep dives with Reds broadcaster Jim Day as he interviews current and former Reds players, coaches, broadcasters, celebrities and those that make news in the baseball and sports world. Jim will feature unique and relaxed conversations that will take you in between the lines and away from the field of play or the broadcast booth. Deep dive into what makes these celebrities tick as sports meets pop culture on the Jim Day Podcast. One click subscribes you to every episode.

Sports
Baseball

101
Ep. 7: Bronson Arroyo Pt. 2
We're back with round two with Bronson Arroyo who dishes on his love for Cincinnati, a love affair that came out of nowhere. We go deep into his friendship with Pearl Jam's Eddie Vedder and being called up on stage to perform not once, but twice! And how "an otherwise fairly ordinary writing utensil" given to him by Vedder turned into the greatest gift he's ever received. And more!
53 min
102
Ep. 6: Bronson Arroyo, Part 1
Find out what retirement has been like for former big league pitcher Bronson Arroyo and go down memory lane with one of the game's good guys. Subjects like: being one of the last people on earth to use a flip phone, how he ended up in a trunk of a car with a horse saddle, Johnny Damon running around naked 5 minutes before games, Kevin Millar in hazmat gear trying to avoid Curt Schilling's underwear, the Arroyo Hot Takes Radio Show on the Reds' team bus, asking his financial guy to give him his burn rate, and pitching 8 games with a torn UCL and torn shoulder. That and more is on Part 1 of our conversation with Bronson on Episode 6 of the Jim Day Podcast.
58 min
103
Ep 5: Bob Kevoian joins the show
National Radio Hall of Famer Bob Kevoian joins the show to discuss his years on one of the most successful national morning radio shows ever, "The Bob and Tom Show." Bob will dish on his love of baseball, his favorite guests and much more!...With a guest appearance from his friend Marty Brennaman.
62 min
104
Ep 4: Sean Casey joins the show
No one tells a story quite like MLB Network Analyst and former All-Star Sean Casey. The Mayor will have you rolling with the day he thought he killed Bob Feller to borrowing Ken Griffey Jr's clippers for a body shave to taking a painful chop from John Cena and many more!
96 min
105
Ep 3: Scooter Gennett joins the show
All-star second baseman Scooter Gennett is one of the true characters of MLB...from how he got his name, his love of Dale Earnhardt, staring down WWE wrestlers, his love and skill with pottery and raising alligators and more! Join in on a lively conversation on Episode 3 of the Jim Day Podcast.
69 min
106
Ep 2: Continuing the conversation with Hall of ...
Jim Day welcomes Hall of Fame broadcaster Marty Brennaman for Part 2 of their conversation.
52 min
107
Ep 1: An offbeat conversation with Hall of Fame...
The inaugural edition of the Jim Day Podcast features an offbeat conversation with Hall of Fame broadcaster Marty Brennaman. Hold on tight, you never know where an interview with Marty will go!
56 min