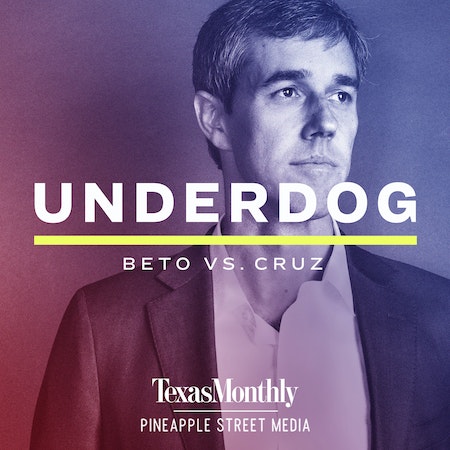 Go inside the most expensive, most talked-about political race of 2018: the U.S. Senate contest between Congressman Beto O’Rourke and Senator Ted Cruz. For a generation, Texas has been America’s ultimate red state. No Democrat has won statewide office here since 1994. Will this be the race where everything changes? Or will Beto-mania turn out to be just another fantasy? For the next month, Texas Monthly, chronicler of life in contemporary Texas since 1974, and Pineapple Street Media, creator of Missing Richard Simmons, will be traveling around the state of Texas, reporting in real time. We’ll go behind the scenes with the O’Rourke campaign, take the pulse of operatives and analysts and pollsters, and talk with the Texas voters of all political stripes who will ultimately decide which candidate and whose vision for the state will prevail.

News
Society & Culture
Government

1
6: Thirty-Six Hours in El Paso
Behind-the-scenes of the final days of Beto O'Rourke's campaign for U.S. Senate.
26 min
2
5: The Caravan and the Blue Wave
How will big, national news stories influence the O'Rourke-Cruz outcome?
17 min
3
4: The Final Push
Beto is four points behind. Is there something the polls are missing?
29 min
4
3: The Sleeping Giant
Can Beto convince thousand of non-voters to show up?
32 min
5
2: Red State
How Texas went red.
29 min
6
1: On the Road Again
Riding through Trump country with Beto.
27 min