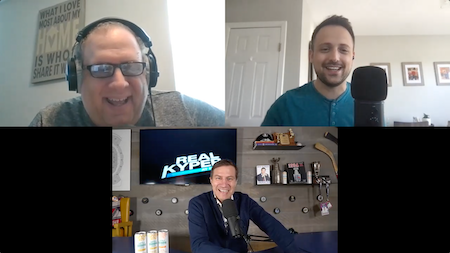 Snow the Goalie: A Flyers Podcast

Snow the Goalie is the go-to podcast for fans of the Philadelphia Flyers and the NHL. Co-hosted by Russ Joy (@JoyOnBroad) and long-time Flyers beat reporter Anthony SanFilippo (@AntSanPhilly), Snow the Goalie aims to bring quality and informed hockey conversation to you each week while at the same time, offer a different glimpse into the personalities of the players, coaches and executives in the sport and present them to you on a more personal and human level. Snow the Goalie has had a wide-range of guests on the program, from Hall-of Famer Bob Clarke, to Flyers coach Alain Vigneault, to current Flyers All-Star Travis Konecny to a player who called himself the "Biggest suitcase in the NHL" in retired goalie Mike McKenna, who played for 11 different NHL organizations, and everyone in between.Russ and Anthony also host "The Press Row Show" the only live, interactive talk show from the Press Box at the Wells Fargo Center on Flyers game nights.Follow the show on Facebook and Twitter (@SnowTheGoalie)