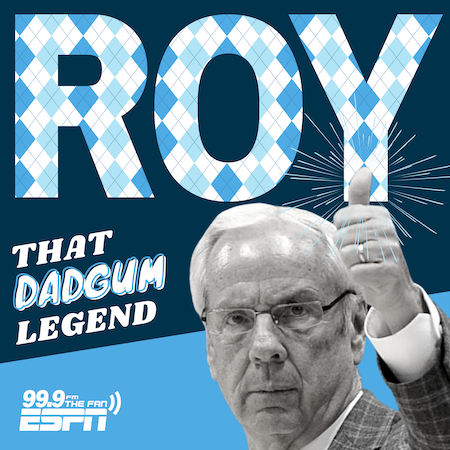 Roy Williams was quick with names and good with the whistle. If he wasn’t, who knows if he ever would have caught Dean Smith’s attention. The sequel to Smith’s dynasty at North Carolina — the five trips to the Final Four and the three national titles with the Tar Heels — never would have happened. Roy Williams ended his hall-of-fame career on April 1, 2021. The story of how he made it to the top with two of the blue blood programs in college basketball, UNC and Kansas, has been told but not like this and not with this type of honesty and insight from That Dadgum Legend himself. ROY is produced by 99.9 The Fan in Raleigh, North Carolina and hosted by Joe Ovies and Joe Giglio.

Sports
Basketball

1
Ep. 7: The retirement tour Roy Williams deserved
Roy Williams beat himself up during his retirement press conference, but the North Carolina family made sure he felt the love during his first year as a Tar Heels fan.
44 min
2
Ep. 6: A bunch of dadgum questions
For the Love of Golf and the Dislike of Pizza
22 min
3
Ep 5: The last connection to old Tobacco Road
Tobacco Road dynamics and the love of coaching
31 min
4
Ep 4: How cursing explains Roy's UNC return
Royisms, technophobia, and finally coming home
39 min
5
Ep 3: The Junk
From NCAA scandal to NCAA title
26 min
6
Ep 2: The End
Repairing UNC family, not titles, is Roy's legacy
39 min
7
Ep 1: The Beginning
How Roy Williams bet on himself and impressed Dean Smith
40 min
8
Introducing the Dadgum Podcast About Roy Willia...
Coming October 20, 2021
1 min