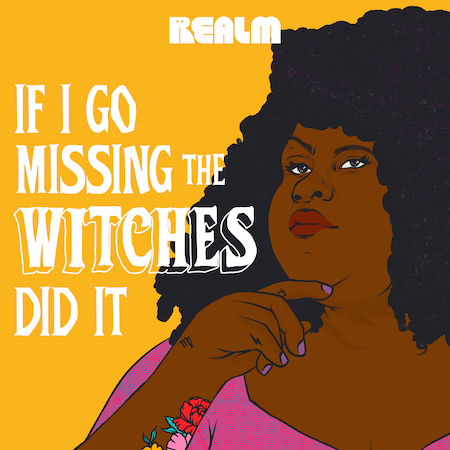 If I Go Missing the Witches Did It

"Where true crime and witchcraft meet...the show masks digestible magic for the beginner witch underneath a tale that discusses all the wrongs in society, which is really what witchcraft is all about." — Teen Vogue

Follow this show to be notified about new episodes being released weekly, or subscribe to the Realm Channel on Apple Podcasts to get early access to the first half of the season!

Starring Oscar-nominated actress Gabourey Sidibe: when a Black writer goes missing, a white podcast host with a savior complex takes up the cause of finding her—and collides with a coven of influencers she suspects are responsible.

After a summer in Westchester soaking up how the other half lives, Jenna Clayton has vanished without a trace. The only clue: a set of voice memos detailing an investigation into a group of influencers she suspected were using magic to achieve their means.

Elise Edgerton is outraged that no one has found Jenna yet, and decides to take up the cause. But despite believing she is using her platform for good, Elise’s mission threatens to turn her into an even worse villain than a witch: a white savior.

If I Go Missing the Witches Did It is a Realm production, starring Gabourey Sidibe and Sarah Natochenny and written by Pia Wilson. Listen Away.

Fiction
Drama

1
Introducing Dark Tome
This week, we would like to introduce you to Dark Tome.
49 min
2
9. Mind Right, Magic Right, Ready for War
Unlikely allies team up to undo the damage done by the influencer coven.
22 min
3
8. On How to Give Magical Beatdowns
Elise’s search takes her to an unfamiliar place— aka Brooklyn. Meanwhile, Jenna’s whereabouts are finally revealed.
21 min
4
7. Dead White Man Says What
When she’s almost lost hope, a ghost appears to Jenna with some practical advice. Elise’s (entirely-fabricated) connection with Victor hangs on by a thread.
22 min
5
Bonus Episode with If I Go Missing the Witches ...
This special bonus episode features a conversation between If I Go Missing the Witches Did It writer Pia Wilson and intuitive and Saved by the Spell host, Marcella Kroll.
52 min
6
6. Cursed
Jenna seeks an ally in her fight against the influencers, only to learn the price of practicing magic.
24 min
7
5. AITA?
War is declared on the coven. At a silent auction, Elise’s serious investigation becomes a laughingstock.
24 min
8
4. $ex Magic
After stumbling upon a magical ritual, Jenna’s witchy suspicions about the influencers are confirmed. When Elise confronts Brooke about Jenna’s whereabouts, a strange seduction occurs.
28 min
9
3. All Skinfolk Ain’t Kinfolk
As Jenna’s haunting visions increase in severity, she tries— and fails— to patch things up with Carmen, the one woman of color in the group.
25 min
10
2. These Retrogrades Are Killing Me
At a summer BBQ, Jenna clashes with a group of influencers: Brooke, Carmen, Meghan, and BeBe. Elise becomes determined to find Jenna— and believes she’s the only one who can.
28 min
11
1. Do Not Die First
Jenna Clayton arrives in Westchester for the summer with Victor, her wealthy, white boyfriend. A month later, gossip-podcaster Elise Edgerton runs into old-flame Victor in a coffee shop and learns Jenna has gone missing.
23 min
12
Introducing If I Go Missing the Witches Did It,...
If I Go Missing the Witches Did It premieres Fall 2021
1 min