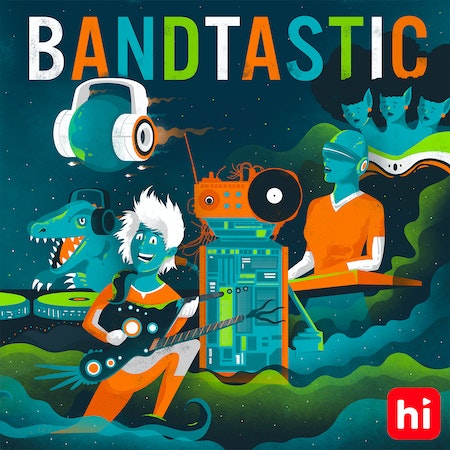 Bandtastic is a sci-fi musical adventure about the most popular band in the universe. Assembled by a super intelligent spaceship, D.E.B.R.A. and not so intelligent robot sidekick R.A.N.D.Y., the intergalactic musicians travel to new worlds with one goal - to solve all of their problems through their incredible songs (byah byah byah!). The band consists of Seabass, a twelve-year-old boy from Earth who has the ability to make anything an instrument, Synthia, a synthetic singer with a glitch giving her the ability to feel emotions, DJ Yeah!, a dinosaur DJ with a one-word vocabulary, and Threesa, a three-headed sage with mind-blowing harmonies. Each episode presents a new challenge for the band. Whether it's teaching joy to a planet full of haterz and trollz or bringing music to a space station full of aliens who don’t have ears, they always find that if they work together, they can solve any problem out there. (Plus their Super AI tour manager is so smart that it can just about see the future, which helps.) Voices by Janet Varney (The Legend of Korra), singer Esthero, Mike Phirman (SiriusXM’s “Kids Place Live”) and Drennon Davis (NBC's Bring The Funny) Created by Drennon Davis and Mike Phirman. A Himalaya production.