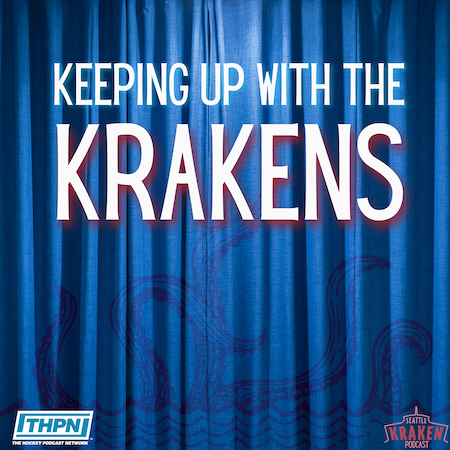 Keeping Up with the Krakens

Welcome to Keeping Up With The Krakens Podcast presented by The Hockey Podcast Network!

Sponsored by Draft Kings, use promo code "THPN" at signup for exclusive offers!

Welcome everyone to Keeping Up With The Krakens, whether you're a Kraken fan or just a hockey fan this podcast will give you a little bit of everything!

Tyler is a Canadian who grew up with a passion for hockey. Tyler played minor hockey growing up and has a big hockey passion both on and off the ice. Tyler has always enjoyed talking hockey and breaking down NHL news and now has found an amazing opportunity to cover the Seattle Kraken through The Hockey Podcast Network.

Keeping Up With The Krakens is a Seattle Kraken podcast hosted by Tyler Bell. He will be covering all things Seattle Kraken this season from game previews, reviews, breaking news, trades and everything in between. If you're a Kraken fan this is the podcast for you.

Jordan Eberle is a Canadian professional ice hockey right winger for the Seattle Kraken of the National Hockey League (NHL). He was selected in the first round (22nd overall) in the 2008 NHL Entry Draft by the Edmonton Oilers.

Mark Giordano is a Canadian professional ice hockey defenceman currently playing for the Seattle Kraken of the National Hockey League (NHL). He previously played with the Calgary Flames for fifteen seasons, where he was the team captain for his final eight seasons.

Jaden Schwartz (born June 25, 1992) is a Canadian professional ice hockey player for the Seattle Kraken of the National Hockey League (NHL). Schwartz was selected 14th overall by the St. Louis Blues in the 2010 NHL Entry Draft.[2] Schwartz won the Stanley Cup as a member of the Blues in 2019, leading the team in goal scoring during the playoffs.

David Hakstol (born July 30, 1968) is a Canadian ice hockey coach. He is the head coach of the Seattle Kraken of the National Hockey League (NHL).

Ronald Michael Francis Jr. (born March 1, 1963) is a Canadian former professional ice hockey centre. He is the general manager of the Seattle Kraken that plans to play its first season in 2021.