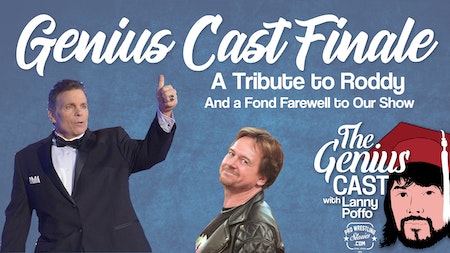 The Genius Cast with Lanny Poffo

The published poet and limerick writing, motivational speaking brother of WWE Hall of Famer Macho Man Randy Savage, Lanny Poffo brings back stories of his brother and the glory days of professional wrestling with this weekly podcast. His wrestling career in the WWE was highlighted by a victory over Hulk Hogan, though nothing highlights anything more in his life than being able to share and recount stories from his past to you, the Genius Cast faithful! Join Lanny and his partner in crime, JP Zarka of ProWrestlingStories.com as they take you through his time in the NWA territories in the 1970s, becoming a star in his father Angelo Poffo’s promotion, International Championship Wrestling (ICW), joining Randy in the Continental Wrestling Association (CWA), traveling with him again to the World Wrestling Federation (WWF) in June 1985 all the way up to today. An excellent storyteller, Lanny breaks down important details of his life while spontaneously breaking into poem or song. Weekly features include the Macho Man Clip of the Week, Poem/Limerick of the Week and so much more. The podcast featured 20 episodes including interviews with Hacksaw Jim Duggan, Terry Funk, B Brian Blair, Fred Ottman, Sean Waltman, Jeff Jarrett, Molly Holly, "Eugene" Nick Dinsmore, "Hustler" Rip Rogers, Kevin Kelly, Bill Apter, Outback Jack, Keith Elliot Greenberg, Sean Oliver, Evan Ginzburg, Alicia Atout, and more. The show ended its run on January 21, 2019.

Sports

1
20: A Tribute to Roddy and a Fond Farewell to T...
We've sadly come to the end of our journey on this show. In the final ever episode of The Genius Cast, we're doing something memorable and special for the fans.
66 min
2
19: Mean Gene Okerlund - A Tribute to Our Very ...
In the penultimate episode of The Genius Cast, we honor our very dear, close, personal, long-time friend, "Mean" Gene Okerlund.
62 min
3
18: Alicia Atout, Heroes Letting you Down, and ...
The New Years Eve edition of The Genius Cast with the stunning and talented, Alicia Claire Atout! Plus: We talk Piper, Randy's elbow drop, heroes letting you down, and more!
65 min
4
17: Terry Funk and Troubles with Brutus the Bar...
We’re coming at you this week with a two-for-one Christmas Eve Genius Cast special with interviews with “Hotshot” Danny Duggan and one of the greatest wrestlers to ever don a pair of tights, Terry Funk!
82 min
5
16: Bill Apter
It is our privilege to have Bill Apter on this week’s episode of The Genius Cast! You may know Bill for his editorial work as well as his exceptional photography over the past forty years in “Apter mags” such as Pro Wrestling Illustrated. You may also ...
72 min
6
15: Sean Waltman
It is our distinct honor to have Sean Waltman on our show this week! In our candid conversation, Waltman opens up about the traumatic brain injury he endured and being told by doctors that his wrestling career was over at age 20, what it felt like to...
64 min
7
14: Memories of Freddie Blassie with NY Times B...
This week, it is our privilege to bring you an interview with TV producer and New York Times bestseller, Keith Elliot Greenberg!
65 min
8
13: Jeff Jarrett
We are thrilled to have third generation wrestler and promoter, 2018 WWE Hall of Famer, J-E double F J-A double R, E double T, Jeff Jarrett on The Genius Cast today!Topics discussed: Training under Tojo Yamamoto, the yin and yang relationship between...
79 min
9
12: Evan Ginzburg (Associate Producer of 'The W...
It is a pleasure to have our friend Evan Ginzburg this week on The Genius Cast! He was the associate producer for the films 'The Wrestler' and '350 Days,' he is the host of the [Evan Ginzburg Show](https://www.villageconnectionradio.com/evan-ginzburg-s...
89 min
10
11: Hustler Rip Rogers
We’re excited to have the head trainer of Ohio Valley Wrestling, Hustler Rip Rogers ([@Hustler2754](https://twitter.com/Hustler2754)) on our show today! He’s a guest many listeners have been asking us to get on for a while now. Rip started off his time...
63 min
11
10: Kevin Kelly and "Eugene" Nick Dinsmore
This week's episode of The Genius Cast is jam-packed with great content! We have two important guests, Kevin Kelly, the voice of New Japan Pro Wrestling, and Nick Dinsmore, formerly known as "Eugene" of WWE!In a special interview taped from Shibuya...
80 min
12
9: Hacksaw Jim Duggan
We are incredibly honored to have legend and WWE Hall of Famer, Hacksaw Jim Duggan on our show this week!In this week's episode of The Genius Cast, Duggan opens up about his time playing college and professional football, being discovered by and tr...
70 min
13
8: Curt Hennig aka Mr. Perfect
Our complete retrospective on Curt Hennig aka Mr. Perfect.
75 min
14
7: Sean Oliver of Kayfabe Commentaries
Welcome to the 7th edition of The Genius Cast where we have a must-listen interview with the Godfather of Shoot Interviews himself, Sean Oliver of Kayfabe Commentaries. Also, hear it here first -- breaking news about Lanny and New Japan!In our reve...
83 min
15
6: Fred Ottman aka Tugboat, Typhoon and THE SHO...
It was our pleasure to have Fred Ottman aka Tugboat, Typhoon and THE SHOCKMASTER from his time in WWF and WCW on the line! In this deep and heartfelt interview, Fred opens up about training under the tutelage of “The Great Professor” Boris Malenko in T...
82 min
16
5: Andre the Giant
It’s hard to imagine a wrestler more memorable or larger than life than Andre the Giant. From stories of brute strength to drinking prowess, the "Eighth Wonder of the World" captivated people wherever he went. Standing at 6 feet 10 inches tall though b...
83 min
17
4: B Brian Blair on Paul Orndorff, The Cauliflo...
Welcome to the fourth edition of The Genius Cast with Lanny Poffo where we have one-half of The Killer Bees and current president of The Cauliflower Alley Club, B Brian Blair as a guest! In this candid discussion, Brian opens up about his dear friend P...
96 min
18
3: Deep Drive Into Randy Poffo's Baseball Career
Welcome to the third edition of The Genius Cast with Lanny Poffo where we take a "deep drive" into brother Randy's 4-year minor league baseball career. Find out how Randy got the nickname "Macho Man" from his time in baseball and more!Plus: "Lost t...
79 min
19
2: Starrcast and #ALLIN Weekend!
Welcome to the second episode of The Genius Cast with Lanny Poffo where Lanny dishes out every detail from his big Starrcast and #ALLIN weekend! From flying out to Chicago not knowing whether or not he would be used, to how Lanny got ahold of his broth...
86 min
20
1: Macho Man in the WWE Hall of Fame
Listen in for a captivating and emotional inaugural episode of The Genius Cast where Lanny addresses “the question,” his resentment towards Jerry “The King” Lawler and Pat Patterson, why he posthumously inducted his brother Randy into the WWE Hall of F...
68 min
21
The Genius Cast with Lanny Poffo is Coming Mond...
The Genius Cast is comingThe Genius Cast is nearAll aboard the happy busOf courage, strength and cheerMy name is Lanny PoffoI seldom tell a lieI’m not a real geniusBut I’ll claim it till I die!Lanny Poffo is coming to th...
2 min